Attend a FREE Seminar to Find Out if Bariatric Surgery is Right For You!

Adult hernias do not go away, they only get bigger with time. When a hernia progresses, robotic hernia surgery can be used to repair the problem. Dr. McDermott and his team are well versed in robotic hernia surgery. Robotic surgery allows the instruments to move with less torque on the abdominal wall but most importantly it allows Dr. McDermott to close the hole which is not possible with traditional laparoscopy. The mesh is then placed in a way that is much less painful than laparoscopic surgery and compared to open surgery, where an incision is made over the hernia of its entire length creating a much larger wound, the incisions can be barely noticed. Smaller hernias can often by missed in open surgery as well.

Hernia types are classified according to where they occur: 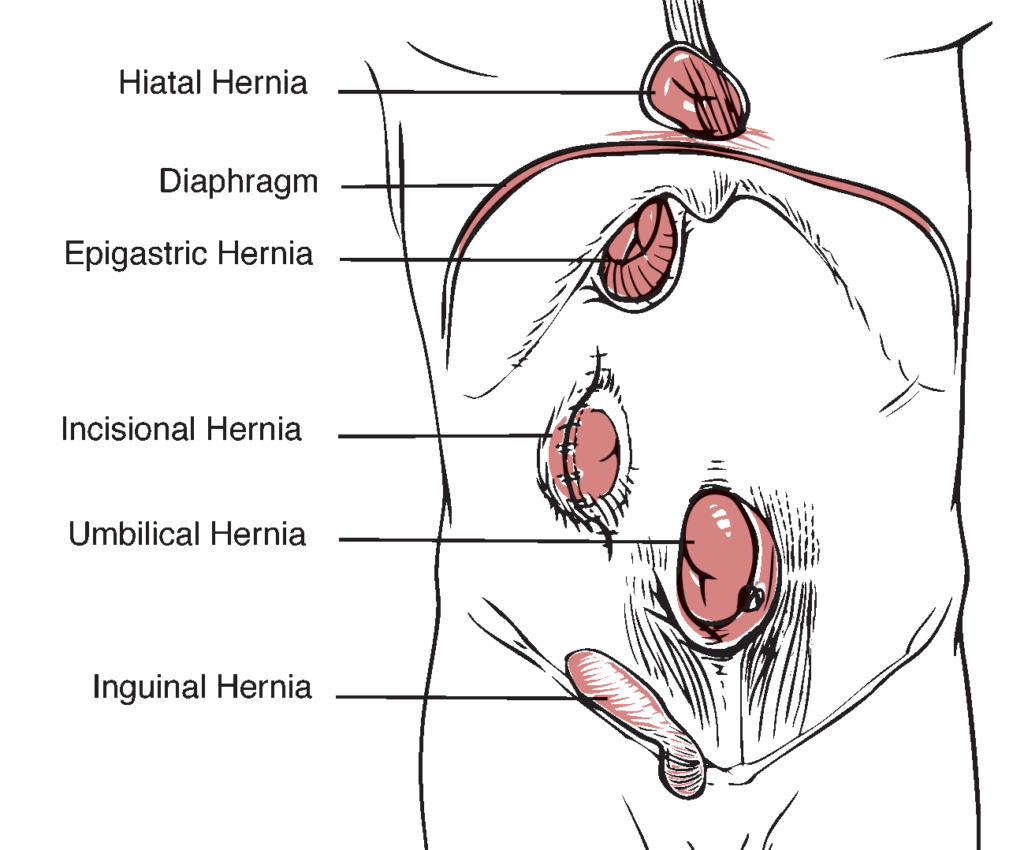 Inguinal hernia occurs in the lower abdomen and occurs when tissue, like the intestines, exploits a weakness in the abdominal muscles and protrudes through. Although less common, the bladder may also protrude. The condition itself is not life-threatening but complications which arise as a result of the hernia can be life-threatening and immediately requiring repair.

Inguinal hernia is named so because it appears above the inguinal canal, which contains the spermatic cord in men. Symptoms include unusual bulging on either side of the pubic area that may be accompanied with burning or aching pain in the area of the bulge, pain when bending, squatting, lifting, or coughing. Additional symptoms include an unusual heavy or dragging sensation in the groin area, weakness or pressure in the groin area. When the protrusion reaches the groin area, it may cause severe pain and swelling.

When a patient suffers a hiatal hernia, a portion of the stomach protrudes through the diaphragm. This condition exploits the natural opening your esophagus uses, pushing the stomach up into the opening. This condition is normally very small and not likely to even be noticed by the patient and cannot be discovered on a physical exam. There are two types: sliding and paraesophageal. Sliding hernias usually causes esophageal reflux and can be controlled with medication most of the time. When medications do not control the symptoms, surgery may be needed. A paraesophageal hernia is more serious as this can cause the stomach to twist and prevent it from emptying or cut off its own blood supply.

Umbilical hernias are a protrusion in the naval, generally caused by intestines, fat or fluids. Umbilical hernias are most common in infants and normally resolve on their own by the time the baby reaches one year. When this condition occurs in adults, the hernia tends to become larger over time, and robotic hernia surgery can repair it. The risk of strangulation is also of concern and can be life threatening. Careful monitoring is needed to ensure strangulation does not occur.

Femoral hernia is a bulge appearing at the top of the thigh near the groin. Named for the femoral canal that contains the femoral artery, it is found just below the inguinal groin ligament. Less than 5% of all hernias are femoral and can be small enough that the patient is not even aware of it. Like inguinal, the same complications can arise.

Epigastric hernia occurs between the navel and breastbone with protrusions of fat pushing through the wall of the upper abdomen. Robotic hernia surgery repair is the optimal method used to treat this condition. Repair in this area is particularly suited for laparoscopic robotic hernia repair surgery in women who wish to keep scarring to a minimum.

Incisional hernia occurs after an open surgery, most often along a vertical incision from a traditional open surgical procedure. This condition can occur soon after surgery or even years later. It is often very painful and requires surgery. However, the risk for this type of surgery can be reduced by using robot assisted laparoscopic hernia repair surgery.

You Deserve To Be Healthy

Request an appointment with us today to see if robotic or weight loss surgery is right for you.

“Weight loss surgery was a fantastic kick-starter to my lifestyle change. From 300+ lbs. to 180 lbs., the sleeve helped me renew my energy, productivity, and dedication to healthy habits like eating well and working out. I ran my first (ever) 5k in under a year post-op and have never felt better! “

Disclaimer
Serious complications may occur in any surgery, including da Vinci® Surgery. Patients should talk to their doctor to decide if da Vinci Surgery or any surgery is right for them. Dr. McDermott will discuss your surgical options and nonsurgical options in order to make an informed decision. Please also refer to https://www.daVinciSurgery.com/Safety for Important Safety Information.